And nowhere is this more true than in high school. Recently, I’ve been exploring the idea that many students in Title I schools are missing the one key skill they need to succeed in college: obnoxiousness.

“What?” you are probably saying. “I went to college, and I wasn’t obnoxious!”

And perhaps you weren’t. But I bet you were obnoxious in the glorious way that EVERYONE IS who decides to take a step into a world of people who are “smarter” than, wealthier than, and different from you.

You have to believe that you can run with the big dogs, even if you look and act like a small one. You need to BELIEVE you are a big dog, even if you are clearly a tiny tadpole. And you have really believe it, or actively be tryign to convince yourself to believe it. Every. Single. Day.

Or here’s another way to look at it: when I was 22 years old, there was no way you could tell me that I wouldn’t have written my first novel by age 30. I had the talent and the interest.

But the longer I was in the world, the less OBNOXIOUS I got. The more interesting people I met, the more I understood about the world, the more money I noticed that I DIDN’T have, the more I started thinking to myself… but who am I to write a novel? What have I experienced? What have I done? Why do I deserve this? And I stopped trying. Because I was no longer surrounded by the veritable army of teachers and mentors who had been telling me for 22 years that I was a good, even great writer. I was in NYC, the land of “but everyone wants to be a writer.”

Those folks who have the gumption to push past the self doubt or, even better, who don’t have enough knowledge to even doubt in the first place, are the ones who get that novel written. It might be terrible, but it’s done.

It’s that BRASHNESS that gets things created in this world, that gets college finished. And it’s that lack of brashness that makes those very things not happen.

Recently, I was lucky enough to have a friend suggest I listen to a recent episode of This American Life called 3 Miles. It is the story of how several students from a high poverty public high school in the Bronx reacted, over the course of years, after walking onto the campus of Ethical Culture Fieldston School. The effect was devastating. Most kids simply could not handle the overwhelming  feeling of I CANNOT DO THIS that took over. They’d simply experienced too much failure.

So here’s how you help them overcome it:

1. Let them win something. Let them compete to the best of their ability and provide lots of different ways for them to win. A great example of this at work is the Annual Poetry Out Loud Competition. While not all students end up winning the national competition, each school’s competition allows for winners at every level, should you choose to run the competition that way. If you have a lot of students in several grades compete, you can have a classroom competition, a grade-wide competition, an audience favorite, and a school wide champion. Simply saying that you were the grade level champ in something feels good. Heck, I still tell people about coming in 4th place in  the Brooklyn-wide spelling bee in 5th grade, and I’m 38 years old. These things stick with you. I was also my school’s storytelling contest champion with the story The Silent Couple.

2. Let them present their work to outsiders. A few weeks back, I brought several students to present at the NBA Cares All-Star Coding Event. My students got to meet Dikembe Motumbo and show off the Scratch Games they’d created to Motumbo and to professional coders at SAP.

Just yesterday, I brought another group of students to Pre-moticon! An intro workshop to help students start thinking about what projects they want to present at Emoticon later this year. My students were already getting psyched about what they will create by the end of the meeting.

3. Encourage oddness. I think this is the most important one. If we want our kids to develop the fortitude to “do their thang” against all odds, even when everyone else says they can’t do it, we need to encourage them to go against the grain. It’s okay to be good at school, to wear odd clothing, to enjoy things other kids don’t enjoy. Teach them to enjoy the things that make them stick out. It is this ability to embrace their oddness that will ultimately allow them to feel that they can’t look any baseless critic in the face–especially their own self-doubt–and tell them to hit the road.

So build it. The kids will come. Slowly. But they will join you as long as you give them ample opportunities to shine and publicize their successes like crazy.

It’s one thing to philosophize about students in the summer; the fall is when the pedagogical rubber hits the road.

I’ve mentioned that I want to strengthen my relationships with students this year. Why? Because as the late Dr. Rita Pierson said, “students don’t learn from teachers they don’t like.” And I want my students to learn. A LOT.

So, this year, I’m aiming to be a teacher students like. And no, not in a buddy-buddy way, but in a way that students know I have their best interests at heart.

I’ve attempted to foster relationships, so far, in several ways:

1. I’m teaching a low-stakes computer science class through Exploring Computer Science. There is no regents exam connected to the course, there is no homework in the course, and students drive most of the classwork. It’s fun and curiosity driven. It engages the kids. They learn in spite of themselves. The course isn’t even called “computer science.” It’s called “Solving Problems with Creativity, Art, and Technology.” We call it CAT Class, for short.

2. I’m trying to bring more fun into classes I co-teach. I wear silly hats, wigs, cat ears (ahem, CAT class), and try to incorporate games and interesting current events. This is an approach I’ve stolen from Dave Burgess’s Teach Like a Pirate methodology.

3. I’m always on the lookout for free or PAID opportunities and contests for students at my school. Even the more ornery ones know that I’m the teacher who will help them out. Opportunities I’ve helped students get since June: paid summer experience with the Sadie Nash Leadership Project, writing opportunities with Teen Reviewers and Critics Program, Internship with Metropolitan Museum of the Arts. I’m pretty sure that at least two more students will get into BAM’s Dancing into the Future program, as well.

4. I’m interviewing SpEd students about their goals and future plans so I have a lot I can write meaningful IEPs. Not only does it make the IEP easier to write, but the kids like answering questions about themselves. I’ve been using this survey because it has questions about their horse riding and car racing experiences that make my inner city students giggle. Curiously, I’ve learned that quite a few of my kids go bowling on a regular basis.

5. In one-on-one conversations, I’m giving advice less and listening and asking questions more. This is something I’m doing in my life, in general, inspired by The Lost Art of Listening by Michael P. Nichols.

6. I’m being nice to myself. This is an important one. I used to beat up on myself a lot for not being better at lots of things. And when I felt frustrated at myself, the emotion spilled over onto my kids. Teens are living, emotion-sensing machines, and they know when you are feeling bad. Of course, they assume it’s about them and get defensive. So it’s important to try to feel good.

7. I’m learning every thing I can about being emotionally supportive. I’m researching schools and youth organizations with Restorative Justice practices. In fact, I’m leading an affinity/research group on restorative justice that you are welcome to join if you are in NYC. Sign up here (public school teachers in NYC will be paid per session!): Sign up for The Restorative Justice Affinity Group.

Teachers in high-poverty schools all share a problem: it is difficult to reach a large percentage of parents/guardians to update them on their child’s progress in school. There can be multiple reasons why. Families move, phone service gets cut off, phone numbers change, emails aren’t read regularly, family tragedy, etc. Life happens.

This year, I’m going to try a new approach to reach parents: VOXER.

Voxer is a FREE instant messaging service that allows users to send text messages or voice messages to other users. It works on iPhones, Android phones, and Windows-powered phones. It’s not connected to your phone number, but to an ID. What does this mean? It means that a parent can get their mobile phone turned off, can get a new phone with a new phone#, and then STILL, using a Voxer ID, get messages on the new phone. I don’t need to know their new number. They don’t need to know mine.

I’m going to try this out and let you know how it goes!

So, I’ve recently fallen in love (metaphorically) with the witty “bro” millionaire writings of Ramit Sethi. And, along with being funny at times, Sethi has some great free products that will teach you a lot about getting started in entrepreneurship, much of which is incredibly astute. I’m talking Stanford University *ahem, my alma mater, ahem* astute. And, oddly, applicable to education.

It occurred to me this morning, as I was reading some of his book on my kindle that a lot of the psychology he applies to making sales applies equally to teaching a class.

Follow these rules when selling a product or service (or day of education):

1. Do not rely on pure information to sell folks on the value of what you’re selling. Rely on RELATIONSHIPS and PERSONAL CONNECTION. It doesn’t matter whether or not your class will help them pass [insert standardized test here]. It matters that you connect with them on a personal level. Heard the description, “she could sell water to a drowning man?” That’s what teachers need to do.

3. Praise feels sooo gooooooooood. It sounds so silly, but, recently, when I took an entry-level French language course at Alliance Francaise, I felt a bit of ABSOLUTE JOY when the teacher told me my answer was right. I was a grown woman in my 30s, and I knew my answer was right, but it was still a huge rush when my teacher told me so. Imagine being a teenager! Double the rush! Triple the rush!

Remember: your students are human. When they seem difficult–chances are that they are just acting like all the other humans act when they are forced to do something they don’t want to do!

And that’s when you have to become a salesperson. 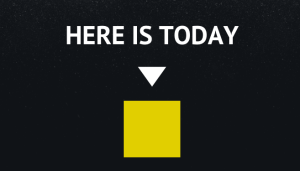 Teaching history is difficult, particularly when the people you are teaching see no real discernible difference between the era that is “the Seventies” and the era that is “the Renaissance.” As with many folks under 20 years old, the key to understanding periods of history and patterns in history AND science is to have a strong sense of TIME.

That’s why this site, here is today, is great. Check it out. Just keep clicking OKAY+